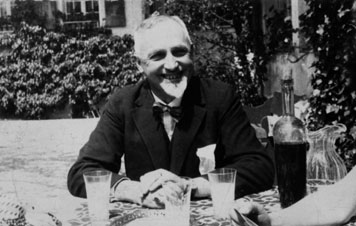 In 1884–86, Amiet takes painting lessons with Frank Buchser. In 1886, he graduates from high school and enrolls at the Academy of Fine Arts in Munich. In 1887, he strikes up a friendship with Giovanni Giacometti, with whom he stays in Paris in 1888–1891. In 1892–93, he joins the circle around Gauguin in Pont-Aven. In 1893, he returns to Solothurn and meets Ferdinand Hodler, who becomes a close friend. In 1895, he sets up his studio in Hellsau before moving, in 1898, to Oschwand, Emmental. In 1906, Amiet becomes a member of the German artists’ association “Brücke.” In 1912, he sends seven works to the “Sonderbund” exhibition in Cologne. In 1914, he is introduced to Alexej von Jawlensky and Marianne von Werefkin, who visit him at Oschwand several times. In 1915, he and Jawlensky exhibit work together at Kunstsalon Wolfsberg, Zurich, and in 1917, he travels to Berlin to pick up a picture by van Gogh that belongs to Jawlensky and bring it to Switzerland. In 1916, he meets Karl Im Obersteg. A fire at the Munich Glaspalast in 1931 destroys a considerable part of Amiet’s early oeuvre.