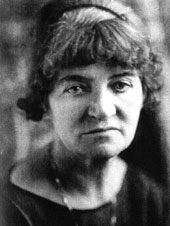 Having grown up in Montmartre, the young Suzanne Valadon works in a tailor’s workshop, then as a circus acrobat. After an accident, she models for Pierre Puvis de Chavannes, Auguste Renoir, and Henri de Toulouse-Lautrec. Her son Maurice, who will later win renown as Maurice Utrillo, is born in 1883. In 1895, at Edgar Degas’ encouragement, she begins to draw and produces her first etchings and lithographs. Embarking on a career as a painter, she discards her given name, Marie-Clémentine, styling herself Suzanne Valadon. In 1909, she begins an affair with the painter André Utter, who gradually steers her toward oil painting. That same year, her work is first displayed in the Salon d’Automne. In 1918, she spends some time in an asylum for alcoholics. An exhibition of her work together with Utrillo’s and Utter’s at Galerie Bernheim-Jeune in 1923 is a success, and the trio moves into the Château Saint-Bernard in Ain. Hard contours and a very colorful palette are the hallmarks of the pictures she paints after 1927.