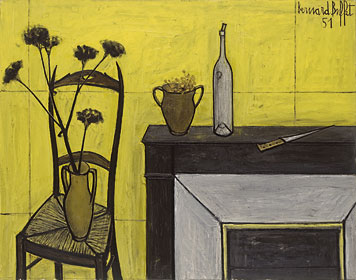 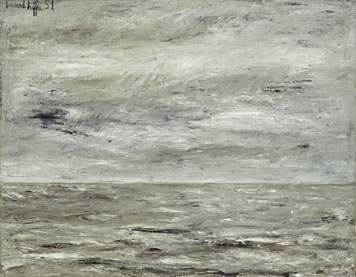 The French artist Bernard Buffet is particularly represented in the Im Obersteg Collection with a group of 24 paintings. The paintings were purchased over a relatively short period, from around 1951 to 1959. The career of Bernard Buffet, born 1928 in Paris, began exemplarily. As early as 1948 he was awarded the “Prix de la critique”, which was the basis for his breathtaking rise in the Olympia of the visual arts. The barely 20-year old Buffet now had regular solo exhibitions in the Galerie Drouant-David in Paris and painted up to 200 pictures a year. He was celebrated as one of the greatest art talents. The 1955 ranking of the most important contemporary French painters published in the journal “Connaissance des Arts” awarded Bernard Buffet first place. In interiors and still lifes, the viewer is ‘treated’ to an oppressively empty and cold world. The few remaining objects in the pictures, drastically reduced in color and given a harshly linear treatment, wrest from life an only pitiful existence. The works, produced immediately after the war, are mute witnesses of a society scarred by disaster. The reproachful content, as well as the quality of the painting (for instance in Marine) must have sparked the interest of the Basel collector. The collection, which mostly consists of still lifes, portraits and landscapes, concludes with a portrait of Karl Im Obersteg, which, as the only picture of the collector, has a unique significance. From the mid-1950s, Buffet switched to a brighter palette and hedonist themes. As a result, Im Obersteg’s collecting fever waned. What remained was an intact group of Buffet’s important early works.