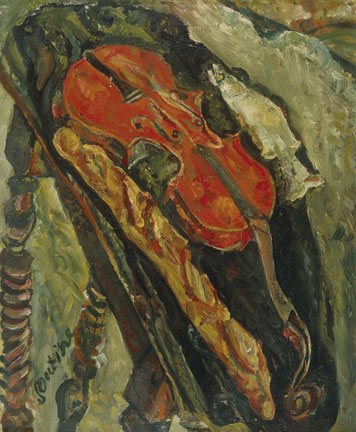 Russian artists or those originating in Russia, who have enormously contributed to the art history of Modernism in central and western Europe, constitute a focus in the Im Obersteg Collection. Along with works by Marc Chagall, Robert Genin, Alexej von Jawlensky, Wassily Kandinsky, Aleksander Rodchenko and Marianne von Werefkin, there are excellent works by Chaïm Soutine, Russian by birth, who lived and worked for the most part in Paris, from 1913 up to his death in 1943. Soutine was, along with Chagall, one of the most prominent representatives of the “École de Paris”, artists who from all over Europe emigrated to Paris in the first decade of the 20th century and there made up the core of an avant-garde with international charisma. Soutine’s highly forceful painting is assigned to French Expressionism. All his life the artist remained an outsider. First marked by the biting poverty of the ghetto and, after his artistic breakthrough, still tormented by a benumbing isolation, Soutine created his works under the extremest of human conditions. His production, in an oppressive way, thematizes the existential solitariness and isolation of the underprivileged poor in our society. Karl Im Obersteg, who had already interceded on the behalf of German war victims during World War I, also later concentrated on artists who were social and religious outcasts like Soutine or were considered exiled artists. Soutine’s workgroup in the Im Obersteg Collection, made up of seven paintings, shows the human figure as its thematic focus. These are accompanied by a still life and the painting of a dead pheasant. His free and radical way of painting, combined with the deeply human expression of his models, must have especially touched the collector. Im Obersteg’s fascination with color and its visible application on the canvas and with the play of contrasts led him to carry a postcard-size paper frame around with him in exhibitions so that he could view the details of painting all the more exactly.