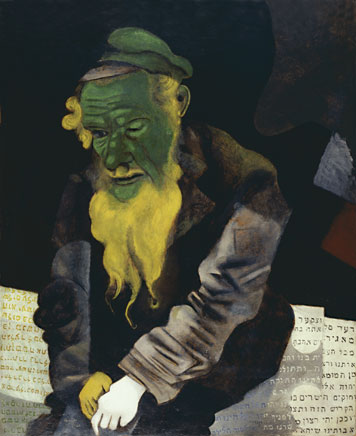 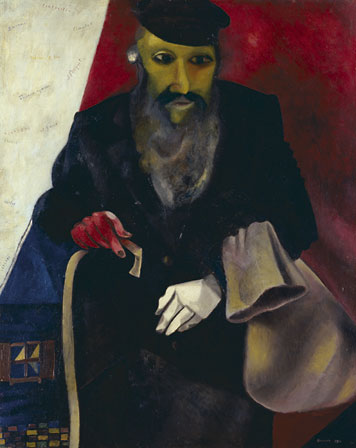 Among the topflight works of the Im Obersteg Collection are four paintings by Chagall, a self-portrait and three depictions of elderly Jews, the so-called “great Rabbis”. Experts are of the undivided opinion that these are four of the most significant works that Chagall painted at the beginning of his second Russian period (1914-1922) in Vitebsk, when after a planned short stay in his native land he could not return to Paris because of the outbreak of World War I.
In taking on Cubism, Orphism and Fauvism, the three monumental portraits of Jews, of old beggars and the somewhat smaller Self-Portrait bring together a fully developed form and color vocabulary with Jewish themes and an earthy relation to reality. Created at a time of the persecution and destruction of eastern Jewish tradition and life style by World War I and the Russian revolution, they are important documents of a culture under threat. The significance of these works is reflected in the fact that they were already acquired in 1915-17 by a Russian collector, Alexandre Kagan-Chabchay, for the purpose of founding a museum of Jewish art. In 1936 Karl Im Obersteg bought them from Kagan-Chabchay in Paris, together with paintings no longer in the collection, Over Vitebsk and Feast Day, and thus became one of the earliest collectors and connoisseurs of Chagall’s art.