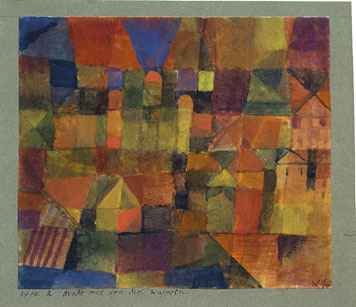 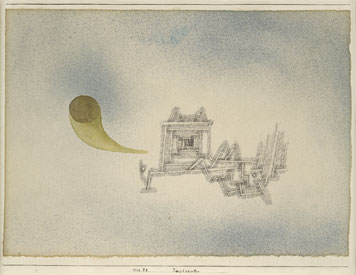 In 1929 Karl Im Obersteg acquired three works on paper by Paul Klee at the Galerie Neue Kunst Hans Goltz in Munich. On 1 October 1919, Hans Goltz had a signed a contract that for five years assured him the sole dealership of Klee’s works. Klee’s hope was that the contract would shore up his financial standing. In 1920 Goltz mounted the most comprehensive exhibition of Klee to date, which very considerably promoted the artist’s fame. In the same year, Walter Gropius appointed Klee to a chair at the Bauhaus in Weimar. Im Obersteg purchased the fourth Klee work at Siegfried Rosengart’s in Lucerne. The small work group combines the most important elements of Klee’s work up to then: the drawing as well as the watercolor that, mixed with an adhesive in the case of Südalpiner Ort B, takes on a material, impasto character. Klee’s effort to illustrate space, mood and objects through color accords and geometric patterns is shown very clearly in two works in the collection.